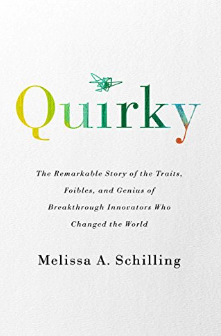 What do the following people have in common? Elon Musk, Steve Jobs, Marie Curie, Albert Einstein, Benjamin Franklin, Nikolai Tesla, Thomas Edison and Dean Kamen. On at least one level they can all claim to have made a significant impact on the world of invention and innovation – there are several Nobel Prizes in their midst and their combined patent total runs into four figures. But they are also interesting individuals – they share a set of characteristics which make them distinctive, different to the mainstream. They are what Melissa Schilling calls ‘quirky’ in her book of the same name and in it she attempts to disentangle some of the characteristics.

It’s a bold and impressive book with some challenging ideas about how we might learn from these people despite their being different. Well-researched and rigorous in approach the book draws on a wealth of material so that each biographical sketch gives us a rounded view of the people involved. As mini-biographies they are fascinating – not to say sometimes a little disturbing. For example Edison’s rival, Nikolai Tesla was undoubtedly a genius but he had some strange habits including an obsession with the number three; in his later life he would only eat food in a building which he had already walked around three times and whose cubic mass was divisible by three! (Despite that he was enough of an entrepreneurial salesman to pitch to J. P. Morgan himself and secure $150,000 of funding for a new communications tower. Characteristically Tesla then spent the money on something else!)

Significantly, despite their apparent differences, her selection of innovators share a number of features. And these fit well with current understanding in the field of creativity – for example, the key importance of openness as a personality trait. Perseverance is another aspect of the creative personality and Schilling’s quirky gang had it in spades.  Edison might be the most famous example with his efforts to find the right filament for his light bulb, but the others also showed enormous tenacity in chasing down their ideas. And the chapter on ‘self efficacy’ – belief from within – helps explain how they were able to deal with failure and offers us some useful lessons on the real challenges in building such a culture.

The difficulty in reading this comes in trying to extract guidelines and lessons for organizations from what, by definition is a group of outsiders who would not fit easily into corporate culture. But there are useful insights, emerging not least from this sense of being apart form the mainstream. Their sense of need for space, for separation and autonomy fits well with lessons we’ve learned about creating such space and permission to explore within an organizational setting. Think Google’s 20% policy which they drew from 3M’s long experience in this direction. Radical innovation is much more likely to emerge form this kind of context where day-to-day pressures are not allowed to intervene.

Or the importance of stretching vision, reaching for apparently impossible targets. Once again the sense of over-arching purpose can draw extraordinary efforts and ideas form people – the famous ‘skunk-works’ model developed by Lockheed Martin back in the 1940s is a good role model here.

There are a couple of niggles – the choice of characters ranges from those who were at the applied end of the spectrum able to create value from their ideas. Edison and Jobs fit this mould, Elon Musk also. And arguably there are useful lessons to be distilled form their experience as practical innovators whose ability to turn great ideas into great businesses is legendary.

But others like Einstein, Tesla and Curie were motivated less by innovation than by the underlying scientific discovery. Their openness and desire to share is commendable but doesn’t teach us much about the skills and characteristics needed to make things happen. This is fine in the science community where peer respect and emulation of experiments is reward itself. But it might have been interesting to explore the aspects of ‘commercial’ – or indeed social value creation and the similarities or differences between these types.

And there’s an inevitable sense of selection bias; it would have been nice to see a table or list with the others she looked at in less detail and even a candidate list for further exploration. But despite these small issues the book is a very helpful contribution and a reminder that in a world where we are so concerned with networks and co-operation there is still a key role for the individual and his or her ability to push through radical ideas, even if that does involve some powerful swimming against the mainstream.

Quirky: The Remarkable Story of the Traits, Foibles, and Genius of Breakthrough Innovators Who Changed the World

Welcome to the
Innovation Portal

To contact the publisher regarding customer service queries please email us at HigherEducation@wiley.com

Connect with the authors: